Get my free 7-step reset that goes beyond the pose & cares for your body, mind and soul!

Guess what yoga community, I am still riding high from our chakra challenge, so high that I decided we need to keep focusing on it…. sooooo, welcome to your weekly yoga video that focuses on goal setting through the chakra system and a power yoga flow.

Oh and there’s a chakra goal setting worksheet too, because like I said, the high factor is still very real.

But before we step on the mat and do this chakra power yoga flow, let’s first discuss how goal setting and the chakra system even relate. I should forewarn you, be prepared to kinda have your mind blown when it comes to this woo-woo stuff, because not only does it make sense, it works too.

….. not sure what the chakras are, but want to learn, there’s still time to join the seven day challenge, just click here.

Okay, here we go, down the rabbit hole.

The chakra system has two currents within the body, who knew.

The traditionally taught and widely known current is liberation, starting at the root chakra, traveling up the spinal column, and ending at the crown chakra. The goal in working with this current is to identify our stuck energetic centers, stuck meaning a chakra that is either operating in excess or depletion.

As we work through each chakra traveling up the spine, pulling the mind and spirit towards one another, we begin to identify past traumas and tensions, negative habits, and spaces for healing. We then use the threefold approach (body, mind and soul) to work through the chakra inefficiencies and hope to come out on the other side.

The other side being an understood, opened, and connected chakra.

This is also what we did throughout the Chakra Challenge on a more unconscious, surface level by moving through themed yoga practices. But in addition to the physical side of yoga, there’s also the opportunity to do various movement, meditation, and common sense exercises.

For example, when working with the root chakra, Anodea Judith (Wheels of Life author) recommends doing the below exercises to help balance your muladhara chakra:

So that’s current number one, the widely taught and recognized one, but current number two is why we are here and something that I’m SO excited to share.   Behold, the manifestation current. The manifestation current travels from top to bottom, it’s the pull of the soul and body towards one another, starting at pure consciousness (crown chakra) and descending down through each center, ending at the manifested plane (the earth chakra).

Related: What is the chakra manifestation current? Click here to learn the step-by-step method to get what you REALLY want!

Let me break it down for ya for chakra by chakra, okay.

You have an idea, like for example…. I want to become a yoga teacher because I love the practice of yoga (obviously this story is about me).

It’s an idea that’s floating out in space (crown charka element) and rotating in your cosmic consciousness. It then descends down into the sixth chakra where the thought formulates into images. Soon we are picturing ourselves researching programs, attending weekend workshops, and teaching our peers yoga postures like warrior one and warrior three.

But visualization isn’t enough, which for many of us is where we tend to get stuck, it’s words and communication (fifth chakra space) that start to manifest our idea into the earth plane. Soon we find ourselves telling our family members and closet peers, I want to become a yoga teacher… or maybe it’s shared in an Instagram post for #manifestmonday, but either way, we begin to communicate our idea outwards.

….. why do we get stuck here, because we fear the reactions of others towards our idea, making it easier to keep it quiet and hidden within.

As the idea the further develops, we now seek out relationships to help make our dream manifest, like visiting various yoga schools, interviewing the school director, or talking to our yoga teacher about their experience with becoming a teacher.

It’s also here that we honor the qualities of the heart chakra – self-love, compassion, and expansion – as our idea continues to evolve and manifest, meaning don’t beat yourself up for having an out of the box, unconventional idea.

Love yourself through the process, because no matter how great the idea, there will be hardships along the path.

At this point in the journey, we are in the yoga teacher training program. showing up weekend after weekend, doing the assigned homework, practicing our yoga pose cueing, and reading the recommended texts. It’s here, in our solar plexus chakra, that we exert willpower, energy, movement and purpose to just do it.

The final weekend or day of your yoga teacher training program is usually reserved for the grand finale, teaching a full-length yoga class to your peers. Oh man, it’s scary as shit, intimidating yes, but you worked hard to get here, and it’s time to present.

This is the sacral chakra in action, the act of birthing your idea into reality.

Lastly, our thought which descended into a goal has manifested onto the earth plane (the root chakra), you are now a certified yoga teacher.

It is official, you are the real deal.

And now let’s pause, because how freaking cool was that. So cool, right.

The first time I caught wind of this manifestation current (in a yoga class of course), I came home and began scribbling what the yoga teacher had said. It all made such perfect sense to descend down the chakra system in this way. But I will say from experience, it’s easy to love what we are already good at, meaning I excel at setting goals and going after them.

It’s an innate quality of mine to visualize an idea, go after it, and create it.

But guess what’s not innate, traveling the other way, upwards through the chakra system on the liberation current. It feels very raw and real to me, vulnerable as anything, and even trivial, because who wants to meditate and journal about their feelings, let’s make goals manifest instead.

So this is where my work lies, the liberation current, traveling upwards and moving towards freedom, expansion, abstraction, and connection.

But regardless of which current needs fine tuning, today’s focus is to work downwards and experience the manifestation current. Once you work with both currents, then it’s your turn to decide what system needs more loving.

Now let’s stop all the talking, because lord knows I can keep going, and start the bending, breathing, and manifesting on our yoga mats. I’ll meet you there, ready to manifest through our chakra system and get a bit sweaty with a power yoga flow! 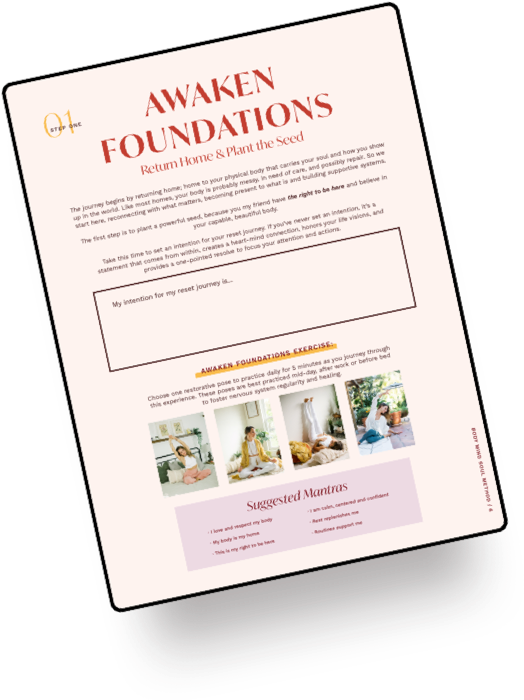 I wanna learn it all!

The Yoga Reset Guide is my FREE 7-step journey to deepen your practice and recenter your body, mind and soul. Self-paced, no equipment necessary, perfect for beginners AND veteran yogis. 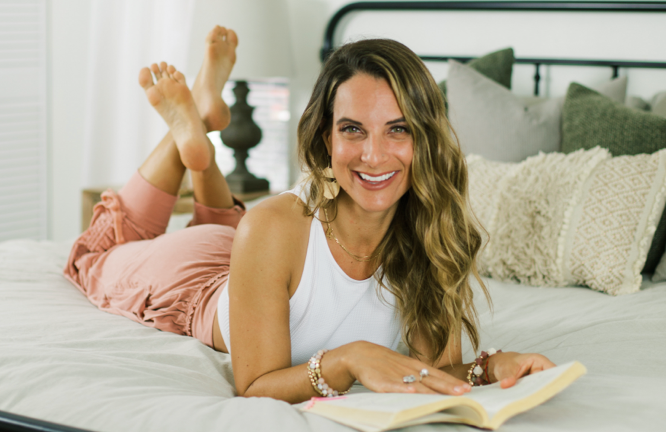 I’m a self-growth student, freedom-seeker, yoga teacher and the founder of a tight-knit online yoga community: the Body Mind Soul Studio. I’m here to teach you how to transform your life on-and-off-the-mat with a holistic yoga practice. 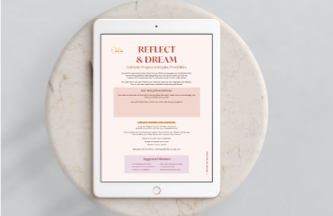 I wanna learn it all!

The Yoga Reset Guide is my FREE 7-step journey to deepen your practice and recenter your body, mind and soul. Self-paced, no equipment necessary, perfect for beginners AND veteran yogis.

Sometimes we need a top-to-bottom reset, whether it’s work stress, relationship changes, or that stuck in a rut feeling we get.

The Yoga Reset Guide is my FREE 7-step journey to return to your mat, deepen your practice, and experience a body, mind, soul refresh.

Become the soulful CEO of your business

Get on the list to join the 90-day yoga teacher mastermind experience.